A thoroughly successful conference: Youths' voices have been heard 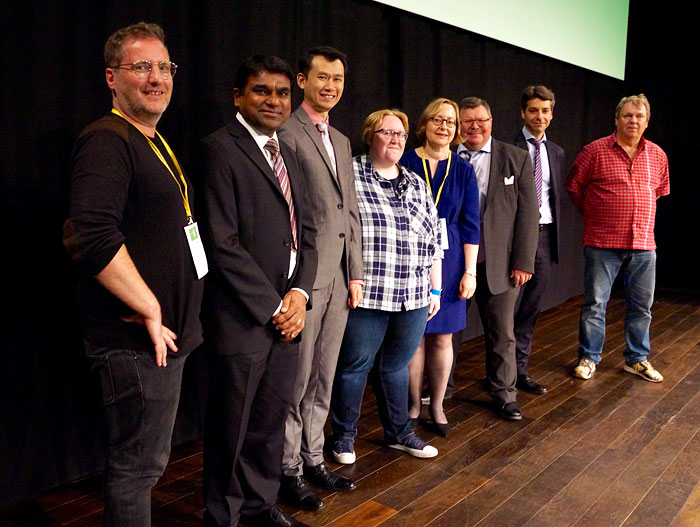 The last session of the conference was just as well-attended as earlier sessions. The lecture hall filled quickly with enthusiastic listeners wanting to hear the last three talks and a summary of the conference. Elizabeth Hanson stated that these had been fantastic days, especially yesterday when the expert group of young carers shared their own experiences and visions of the future.

Dr. Yongjie Yon, from the World Health Organization, WHO Europe, was first of the speakers. His talk focused on how to prevent injury and violence toward children and youths. He showed statistics of the situation around the world, clearly illustrating how the problem is widespread, especially in developing countries.

It is important to remember that children are not small adults, but that they live in an adult society, where they are extremely vulnerable. WHO considers it of utmost importance to incorporate efforts to counteract harm and violence toward children at many levels in society, he said and presented some of the WHO Europe goals for 2020:
• Increase healthy life expectancy
• Enhance well-being
• Reduce inequities
• Reduce premature mortality
• Governance and determinants for health and universal health coverage
• Establish national targets in health policies and monitor

He then highlighted "The Minsk Declaration" and pointed to the three overriding goals:
• Acting early
• Acting in time
• Acting together

These days have shown in particular that behind every statistic there is a person, a child who is hurt, he emphasised. Yongjie Yon also showed figures of how the world looks in terms of injuries and violence towards children. He had the unbelievable statistic that over 1 billion children in the world are subject to injury and violence in one year.

He spoke about extensive material available from WHO Europe, including a large number of handbooks and statistics as well as policy and strategy documents. Read more at:

Together we can change

–What is important now is that we act together at different levels in society, where the media also have a significant role. Together we can work to make a change around the world.

Ingvar Nilsson, an economist who for several decades has done different socio-economic studies, has looked at what exclusion costs society.He posed the question, what are the costs to society of not investing in children, including what that means from a human and moral perspective? One can see preventive work as an essential social investment, he stated.
–I actually got started more than 48 years ago, when I was asked if I could help figure out what the cost of substance-abuse is to society. Ever since I always meet the statement that it is always too expensive if you want to fix something. Instead we ought to think just the opposite: what it costs if we do not fix something.

–What we have heard earlier today is that it is beneficial to act early from a purely human perspective, and we have seen that it is also worthwhile economically. Prevention is a good way to use our resources. So you might ask, why is it so difficult?

–Often when interventions are suggested at an early stage, there is someone who says they are too expensive. Again, we must start asking the question, what costs the most? Doing something, or letting it go.

Ingvar Nilsson emphasises that we must begin by doing social analyses, and we must stop thinking about measures only as expenses and instead start seeing them as investments.

Prevention is economically profitable for society

–This is not core research, but is possble to show with numbers and statistics. Something we have seen is that small expenses at an early stage often have the risk of growing into large expenditures for society if no action is taken, says Ingvar Nilsson.

–We have seen that 12 to 13 percent of all who do not attend school, do not enter the labour market and are forced to live a marginalised life.

Considering the economic effects of this, he states that if an intervention is set in at an early stage for the children at risk of failing in school, the costs will not be so high, but the consequences of not doing this can be economically severe for society.

The explanation for why we do not act preventively, Ingvar Nilsson linked to what we call the quarterly-economy, a short-term view of the economy where no one really wants to see or take responsibility for the long-term effects.

–What my colleagues and I have done is to create a map of the situation. We try to link the different relationships to one another. What we can see then is that no one really has an overview of the situation or sees the whole picture. Everyone has tunnel-vision, and worse yet, we have a short-sighted tunnel-vision.

–The result of this is that it becomes impossible to understand and no one takes responsibility for the situation. Everyone blames someone else, stated Ingvar Nilsson.

He explained further that if we see it as an investment cost in the beginning, then the long-term costs for society will be significantly less. He gave the example of a child who finishes school, enters the labour market, supports himself, pays taxes and contributes to society, and in contrast those who do not manage this, cost the society a lot.

–We study the long-term effects. For example, failure in the labour market has effects on so many areas; what does it cost society if a young person enters the labour market three years later than normal because of being a carer for a parent? No one thinks about the costs.

Act early, together and professionally

Ingvar Nilsson pointed to some reasons for our actions:

• We do not have an overview or an overall perspective; instead we have tunnel-vision.
• We do not look at people with a long-term perspective, or speak in terms of investments when it comes to people.

What does it cost society not to assist children and young carers? There are three worrisome scenarios, said Ingvar Nilsson.
• Reduced number of working hours
• Repeated periods of illness and ill-health
• Fatigue more common and for longer periods

In terms of fatigue, we have estimated the costs to be approximately four million Swedish kronor per person. Instead if we could use that money preventively in school, how many pupils could we work with? The conclusion is, says Ingvar Nilsson, that we must always compare the costs between doing something and not doing anything.

He emphasises also that there is not a lack of money, but in contrast there is a lot of money available, but it is often used in the wrong way. But it is possible to change if we instead choose to act at an early stage, work together and act more professionally.

Anil Patil, Director of Carers Worldwide, began by thanking Elizabeth and Lennart and their collaborators for a fantastic conference. With more than 20 years of experience working with health and relatives of the sick in developing countries, his words bear some significance. The organisation, Carers Worldwide, has been working for more than three and a half years with the primary focus on the situation of carers in developing countries.

His interest in the issues surrounding an ill person's family began many years ago in his homeland, India.
–One question I asked myself then was, who would take care of my loved ones if I died? Another experience many years later was when our second child was born with Down's Syndrome, then we asked ourselves the same question and many others. Why is this happening to us? If it were not for our friends, relatives and a good network around us, I would not be standing here today and sharing my experiences with you, said Anil Patil.

–Of course it is a privilege to have her; she is a wonderful and amazing person. We could make a choice in our family in England about how we would handle our situation and decided that one of us would stay home and take care of her and the family. In many other countries, there is no choice.

A whole army of young carers

Anil Patil then showed some statistics about the situation for the relatives of ill persons in England and India.There is a total of 6.5 million carers in England, which is a savings for the country of 134 billion pounds. India has a population of 1.2 billion people, of which over 100 million are elderly. That means there are approximately 150 million carers in India. These are the statistics we have to take into account.
–This is a whole army of carers. Approximately 85 percent of all care is provided by relatives, only 15 percent by professionals.

We have highlighted many different needs for carers in different countries these past few days, and we can say at the same time that the developing countries lack almost everything in terms of support for carers, he stated.

Anil Patil noted that young carers need to be seen, receive attention, get help and participate, regardless of where they live in the world.In conclusion Anil Patil showed a picture of Shamilla in Nepal, a young girl who was happy that her mother recovered because of receiving effective medicine. Thanks to that, Shamilla could go back to school and spend time with her friends again.

Elizabeth Hanson thanked Anil Patil for his inspiring work to change the situation for young carers around the world, work that makes a difference.

Then it was time for some conference speakers to summarise briefly what has taken place over these three days. Ailsa Tweedie, Scotland, one of the young carers in the expert group spoke first.
–We have heard that education can change one's life. But we must provide assistance so that more young carers have the chance of good schooling. As a youngster, I took a big responsibility for my ill mother. Not until I was fourteen years old did I discover that I was a young carer; before this no one had asked me, she said and continued:

–The network we have built here and the working group we have created are important. Because we can work together for change and assist young carers, aboveall so that the situation will improve for coming generations, emphasised Ailsa Tweedie.

Stecy Yghemonos, Director of Eurocarers, gave the conference the highest rating and stated:
– The conclusion I draw from this conference is that we know more than enough to know what needs to be done for children as next of kin and young carers, so that they get the assistance they need, he stated. At the same time he also mentioned that the EU has taken up the issue, which is positive for the continued efforts.

Many youths have spoken

–The most valuable thing is that children as next of kin and young carers have come to speak from many different countries in the world. That young carers have also built an international network and a working group associated with Eurocarers feels extremely valuable. During these days we have also had many fantastic presentations, shared experiences and built networks for our future work. A thoroughly successful conference, stated the enthusiastic leaders of the conference, Elizabeth Hanson, Research Director, The Swedish Family Care Competence Centre (SFCCC) and Professor, Linnaeus University, and Lennart Magnusson, Director, The Swedish Family Care Competence Centre (SFCCC) when summarising in a few words the three days of the well-visited conference: "Every Child has the Right to..."