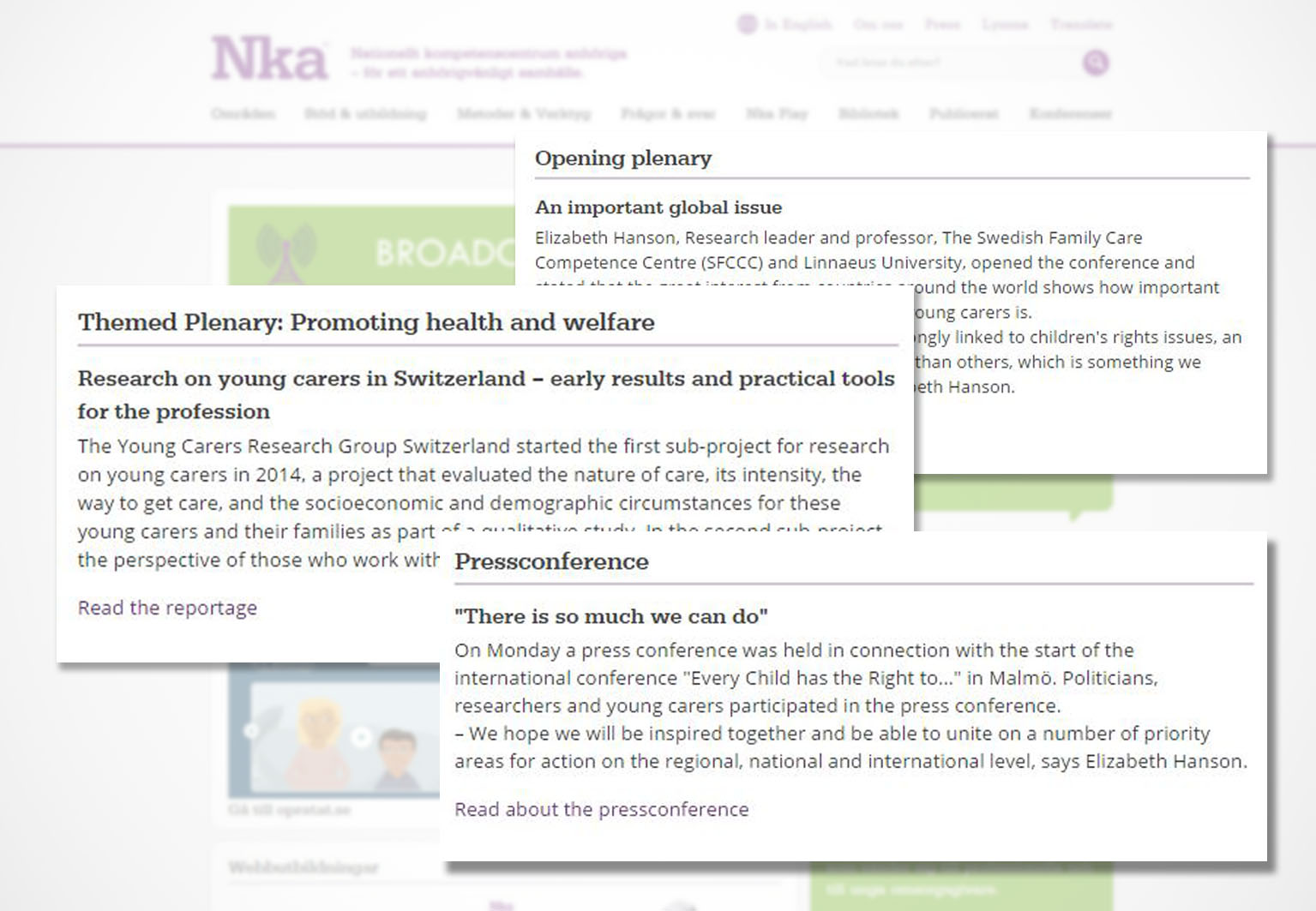 Elizabeth Hanson, Research leader and professor, The Swedish Family Care Competence Centre (SFCCC) and Linnaeus University, opened the conference and stated that the great interest from countries around the world shows how important the global issue of children as next of kin and young carers is.
–The title "Every Child has the Right to..." is strongly linked to children's rights issues, an area where some countries have come farther than others, which is something we certainly will highlight in these days, says Elizabeth Hanson.

Read about the opening plenary

On Monday a press conference was held in connection with the start of the international conference "Every Child has the Right to..." in Malmö. Politicians, researchers and young carers participated in the press conference.
– We hope we will be inspired together and be able to unite on a number of priority areas for action on the regional, national and international level, says Elizabeth Hanson.

The Young Carers Research Group Switzerland started the first sub-project for research on young carers in 2014, a project that evaluated the nature of care, its intensity, the way to get care, and the socioeconomic and demographic circumstances for these young carers and their families as part of a qualitative study. In the second sub-project, the perspective of those who work with prevention in the area was investigated.

Dag Norlander has worked with trauma since the 1990s, and according to him, to some extent trauma psychology has limited value with respect to understanding young carers' situations and needs. In trauma psychology, the main focus traditionally lies on the injury or damage caused by negative, extreme or overwhelming events. A trauma in one's childhood often happens in a context where something else is also missing, and in reality, neglect and trauma are inseparable, claims Nordanger.

Young carers in Italy – an overview

In Italy there are 169 000 people between the ages of 15 and 24 years old who take care of an adult or elderly family member who has some form of disability. There are actually no current statistics on how many young carers there are in Italy, explained Boccaletti. Only in recent years have the terms, "next of kin" and "family care," entered the political debate, and there is still little awareness and attention among decision-makers and professional persons who come in contact with young carers.

Several researchers spoke during Monday's seminar "Life's opportunities." The common thread was schooling – and absence from that.
In the British study "Adult Carers: Impacts on Education and Health, "Dr Joe Sempik from the University of Birmingham conducted a survey involving 295 older young carers in the ages 14 to 25 years. The study shows that caring has direct consequences on schooling, for example, many school days or parts of school days were lost due to providing care.

Tinna Rós Steinsdóttir, who works for the organisation Eurochild was the first speaker on the plenary "Children's rights and making their voices heard".
–We adults have the task of helping children and youths to grow. These children living with a big responsibility for their parents who cannot sustain their parent role for different reasons, must receive the right support and assistance, she said.

It is the third and final day of the international conference "Every Child has the Right to..." in Malmö, and there is a session with the theme Health and Social Care Systems. Some research was presented on young carers in Sweden and children of parents with an intellectual disability.

A thoroughly successful conference:
– Youths' voices have been heard

The last session of the conference was just as well-attended as earlier sessions. The lecture hall filled quickly with enthusiastic listeners wanting to hear the last three talks and a summary of the conference. Elizabeth Hanson stated that these had been fantastic days, especially yesterday when the expert group of young carers shared their own experiences and visions of the future

Read about the closing plenary